Bangkok is the capital city of the Kingdom of Thailand. If we look into the historical development of this place then we will observe that during the Ayutthaya Kingdom in the 15th century, this place was just a small trading post which later grew and became the capital city. Even though this place excels in the financial and economic sectors, Bangkok houses oldest and famous Buddhist pilgrimage sites till date. The historic Grand Palace and Buddhist temples including Wat Arun and Wat Pho stand in contrast with other tourist attractions. Therefore the people visit these places to enjoy the beauty of the ancient style of architecture and at the same time to realize the teachings of Buddha. Apart from these temples, there are also other Buddhist pilgrimage sites in Bangkok, Thailand. 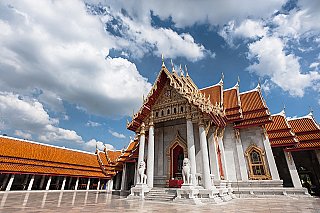 Wat Suthat is a Buddhist pilgrimage site in Bangkok, Thailand. This temple was constructed at the request of King Rama I in the year 1807 CE which was further renovated in the year 1847/48 CE. The temple houses Buddha statue of Sakyamuni Buddha which was moved from Sukhothai province. At the base of the lower terrace, there are Chinese pagodas. It symbolizes the 28 Buddha was born on this earth.

Wat Ratchanatdaram is a Buddhist temple located at the intersection between the road of Ratchadamnoen Klang and Maha Chai Road, in Phra Nakhon district, Bangkok. This temple was constructed in the year 1846 CE with the order of King Nangklao for his granddaughter, Princess Somanass Waddhanawathy.

Wat Pho, also known as the Temple of the Reclining Buddha, is a Buddhist temple complex in the Phra Nakhon district, Bangkok, Thailand. It is located on the Rattanakosin Island, which is south of the Grand Palace. This temple was rebuilt by King Rama I and later expanded and renovated by King Rama III. It is recorded that the temple complex houses largest collection of Buddha statues in Thailand, which includes a 46 m long reclining Buddha.

Wat Arun is a Buddhist temple in Bangkok Yai district of Bangkok, Thailand. Wat Arun is taken as one of the best landmarks since the first sunlight of the morning reflects off the surface of the temple with pearly iridescence. The main feature of this temple complex is the Prang, a tower, which is built in Khmer style. There is an ordination hall next to the Prang which houses Buddha statue.

Wat Paknam Bhasicharoen is Buddhist temple located in Phasi Charoen district, Bangkok, Thailand. The temple was established in the Ayutthaya period which later became famous because of the meditation master, Luang Pu Sodh Candasaro. He was abbot of the temple in the first half of the twentieth century. Later in 2012 CE, Somdet Chuang build a huge stupa at the temple, named "Maharatchamongkhon" which helped the temple to attract the international tourists.