Buddhist deity, Guanyin is an East Asian bodhisattva associated with compassion as respected by Mahayana Buddhists. She is commonly known as the goddess of mercy. It is believed that when Guanyin's followers depart this world, they are placed by Guanyin in the heart of a lotus, and then sent to the Western Pure Land of Sukhavati. It is mentioned in the Lotus Sutra and Karandavyuha Sutra that among the bodhisattvas, Guanyin regarded as the most widely beloved Buddhist Divinity.

It is generally accepted among East Asian followers that Bodhisattva Guanyin was originated as the Bodhisattva Avalokitesvara. It is often depicted as both male and female to show this figure's limitless transcendence beyond gender. But in Chinese folk religion, there are mythical accounts about Guanyin's origins that are not associated with the Avalokitesvara as described in Buddhist sutras.

Since the Buddhist deity, Guanyin is very popular in Asia among the devotees, she is known by many names. This is mainly due to the localization of the Buddhist deity Guanyin. Some of the names are: Kannon in Japan, Gwan-eum in Korea, Hokkien Kuan Im, Phra Mae Kuan Im or Chao Mae Kuan Im in Thailand, Kwan Yin Medaw in Burma, Quan Am in Vietnamese, Preah Mae Kun Ci Lem in Khmer, Natha Deviyo in Sinhalese, Chenrezik in Tibet, and Kab Yeeb in Hmong.

There are various legends associated with Buddhist deity Guanyin. Some of them are as follows as:

One of the legends from the Complete Tale of Guanyin and the Southern Seas presents Guanyin as vowing to never rest until she had freed all the beings from samsara or cycle of rebirth. Despite the hard effort, she realized that unhappy beings were still present in the world. Thus while fulfilling the needs of so many people, her head split into eleven pieces. Acknowledging the hard effort of Guanyin, Amitabha gave her eleven heads to help her to do her job effectively and efficiently. Again when she heard the cries of the humans, and upon reaching to them her hands were also shattered into pieces. Once more Amitabha Buddha helped her and provided a thousand arms to let her reach out to those who are in need.

Another legend states that the story of the differently-abled boy, Shancai who had a deep interest to study the dharma. When Shancai knew the Buddhist teacher was on the rocky island of Putuo, he quickly journeyed there to learn the dharma. Despite his severe disability, the boy Shancai managed to find Guanyin. After the conversation with the boy, Guanyin wanted to test the interest of learning dharma of the boy. Therefore, Guanyin portrayed the illusion of three sword-wielding pirates running up the hill to attach her. The boy saw that Guanyin took off and dashed to the edge of a cliff. The boy found that still, they were chasing Guanyin. Therefore, the boy ran uphill. There the boy found that to save herself, Guanyin jumped over the edge of the cliff. The bandits were following the Guanyin. With the desire to save the teacher, he managed to crawl his way over the cliff edge and jumped off the cliff. Observing the behavior of Shancai, Guanyin was very impressed and halted him in the mid-air. Shancai found out that he could walk normally and he was no longer crippled. When he observed his face in the pool of water, he found that he had a very handsome face. From that day onwards, Guanyin taught Shancai the entire Dharma. 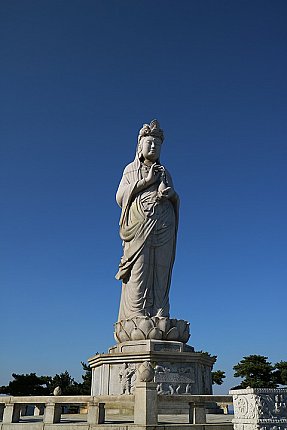 It is believed that Guanyin was represented as masculine figure prior to Song dynasty in China. But later on, the images were believed to be in accordance with the Lotus Sutra. In Lotus Sutra, Avalokitesvara is depicted as Buddhist deity having the supernatural power assumed to relieve suffering, and also has the power to grant children. Since the bodhisattva was more associated with the personification of compassion and kindness, and a mother goddess, the representation was further interpreted in an all-female form around the 12th century. In the modern period, Guanyin is most often represented as a beautiful, white-robed woman, a depiction which derives from the earlier Pandaravasini form.

In some Buddhist temples and monasteries, Guanyin's art and statues are occasionally portrayed as that of a young man dressed in Northern Song Buddhist robes and seated gracefully. He is represented as looking down symbolizing that Guanyin continues to watch over the world. It is also found that statues of Guanyin are most of the times depicted along with Buddha statues and statues of other Bodhisattvas.

Guanyin is also depicted as a young woman dressed in a flowing white robe. She usually wears neckless. In her left hand is a jar containing pure water, and the right holds a willow branch. Her crown usually depicts the image of Amitabha.

In some Buddhist art of China, Guanyin has often depicted either alone, standing atop a dragon, or accompanied by a white cockatoo and two children or two warriors. It is believed that the two children; boy named Shancai, and girl named Longnu; which is depicted in the Buddhist art along with Guanyin are her acolytes who came to her when she was meditating at Mount Putuo. The two warriors depicted along with Guanyin are the historical general Guan Yu from the late Han dynasty.