After the liberation of Sukhothai from the Khmer by King Sri Indrathit in the 14th century A.D., the king adopted a form of Buddhism based on a Sri Lankan School. This period saw a rapid development of Sukothai Buddha statues and made a different appearance to Mon and Khmer styles.

The main differences can be seen in the 'Walking Buddha' which is an original creation of Sukhothai School. The model of inspiration for this new style can be taken as the 'Mahapurislaksana Text' (Features of the Great Man). This developed the idea of idealistic and superhuman characterstics and expressed the power of compassion and serenity. 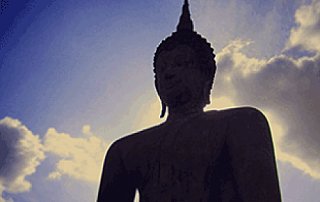 These developments expressed Sukothai Buddha statues as worthy of high praise because of its unique and beautiful style. Similarly the famous 'four postured' group of Buddha images were also carved during this period. These four poses are walking, standing, sitting and reclining Buddha images. The Sukothai statues can be classified into four distict groups.

The Major Group: One of distinguished Sukothai features included a flame aureole, whoris of fine curled fair, an oval face, high curving eyebrows, downward gazing eyes, booked nose and a gentle smiling expression. The torso included broad shoulders and a small waist. Robes were hung diagonally across the body and were completed with a zigzag edged mantle that extended down to the navel. Most commonly the Buddha would be seated in the Subduing Mara (Maravijaya) posture on a plain base.

Tha Kamphaengbet Group: The characterstics are generally similar to the Major group apart from a broader upper face and a pointed chin.

The Phra Phutthachinaraj Group: In this group, thought to have originated during the reign of King Lithai, the aureole is flame shaped the torso is rather plump, the face rounded and all fingers (excluding the thumb) on each had were equal length.

The Heterogeneous Group or Wat Ta Kuwan Group: First discovered at Wat Ta Kuwan in Sukhothai. The facial features are similar to images from the early Chiang Saen - Lanna period. This style is thought to have been created during the early 14th century A.D