Astamangala is a sacred collection of Eight Auspicious Signs or Symbols which are valued in different religions. These symbolic attributes not only point to the qualities of enlightened mind stream but they are also the investiture that ornaments these enlightened qualities.

Originally, the grouping of these eight Auspicious Signs was used in India at various ceremonies. These ceremonies mainly included an investiture or coronation of a king. Early symbols included in Buddhism were a throne, swastika, handprint, hooked knot, a vase of jewels, water libation flask, pair of fishes, lidded bowl. These symbols represent the offerings made by the gods to the Buddha as he was enlightened.

Tibetan Buddhists utilize this auspicious symbols in their household and also in public art. Some common interpretations are given along with each symbol although different scholars may give different interpretations:

Conch: It is believed that the sound of the conch shell represents the beautiful, deep, melodious, interpenetrating and pervasive sound of the dharma. This helps to awakens the disciples from the deep slumber of Ignorance and urges them to accomplish their own welfare and at the same time welfare of others.

Endless Knot: The endless knot symbolizes the auspicious mark which is represented by curled noose emblematic of love. It is believed to be the symbol of the ultimate unity of everything. It also represents the intertwining of wisdom and compassion; the union of wisdom and method; the inseparability of sunyata and pratityasamutpada. This knot also conveys Buddha's teaching of the interpenetration, metaphorically. 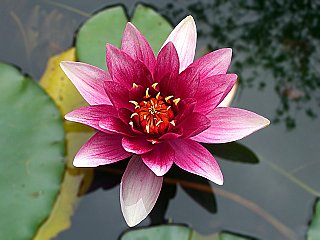 Lotus: The lotus flower symbolizes purity and renunciation. Although the lotus has its roots in the mud at the bottom of a pond the flower lies above the water. Therefore, the lotus flower represents the purity of the body, speech, and mind. In Buddhism, the lotus bloom has 4, 8, 16, 24, 32, 64, 100, or 1,000 petals. This numbers of petals have been taken from the body's internal lotuses or the energy centers.

Vase: The treasure vase represents health, longevity, wealth, prosperity, wisdom and the phenomenon of space. The treasure vase symbolizes the Buddha's infinite quality of teaching the dharma. It is believed that no matter how many teachings he has shared, the treasure has never lessened. This Vase's iconography is similar to the Kumbha which is possessed by a bhikkhu or bhikkhuni in Theravada Buddhism.

Dharmachakra: The dharmachakra is also popularly known as the wheel of the law which represents the Buddha and the Dharma teaching. This symbol is commonly used by Tibetan Buddhists. The wheel sometimes includes an inner wheel of the Gankyil.

Newar Buddhists don't use Wheel of Law as the eight auspicious symbols but instead, they use a fly-whisk. It is made up of Yak's tail attached to a silver staff.

Along with Astamangala, there are other symbolic attributes- Buddhist arts (Buddha statues, Buddha heads, thangka paintings, etc.) which also possess deep meaning within. The Buddhists followers, disciples as well as others also value these attributes.

Note: if you are looking for quality, antique Buddha statues or accessories then please feel free to go through our online gallery. we have a huge collection of various period and regional buddha statues from Thai buddhas to Burmese buddhas.