Kaundinya was a Buddhist monk and was one of the first five arhats who received the discourse from Buddha. He lived during the 6th century BCE in ancient India, now Uttar Pradesh and Bihar, India. Kaundinya is also popularly known as Ajnatakaundinya.

Kaundinya was a brahmin who was appointed as a royal court scholar of King Suddhodana of the Sakyas in Kapilavastu. He was the one who predicted the future of the Siddhartha Gautam as an enlightened Buddha and vowed to become his disciple. He along with other four colleagues followed Siddhartha in six years of ascetic practice but eventually abandoned him as Siddhartha gave up the practice of self-mortification.

Later after the enlightenment, Siddhartha gave his first dharma talk to Kaundinya and his colleagues. The group of five persons was the first to comprehend the teaching and thus became the first bhikkhu and an arhat. 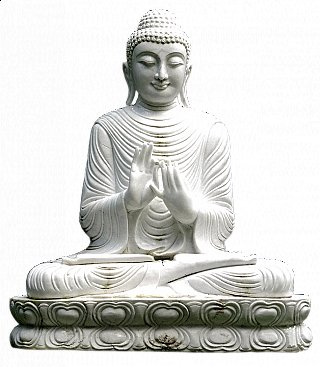 Kaundinya was born before the time of Siddhartha to a wealthy Brahmin family. At the young age, he mastered the three Vedas and also excelled in the science of physiognomy. Therefore he was also invited to the palace to predict the destiny of Crown Prince Siddhartha at the naming ceremony along with other Brahmins. All the other scholars raised two fingers and offered a twofold prediction. These predictions were- either Siddhartha Gautam would become a supreme king or would renounce the world and become a supreme religious leader. But Kaundinya was only one who predicted that Siddhartha Gautama would renounce the world to become the Buddha. Thereafter he vowed that he would follow when Siddhartha became an ascetic to learn from the future Buddha's findings.

As it was predicted, Siddhartha Gautam at the age of 29 renounced the world to become an ascetic. As Kaundinya vowed to follow Siddhartha Gautam also kept his vows. The other persons who had read Siddhartha's future or the sons of those scholars also followed him into the ascetic life. The other four people were Bhaddiya, Vappa, Mahanama, and Assaji. They all took approval from the King Suddhodana. There were called the group of five or group of five fortunate ones.

Siddhartha learned under the Alara Kalama and then Uddaka Ramaputta. When he mastered all the teachings, he left and began practicing self-mortification along with Kaundinya and his four colleagues at Uruvela. They continued self-mortification practice which involves self-deprivation of food and water and exposing themselves to the elements to near-death for six years. With no achievement Siddhartha rejected self-mortification. Kaundinya and his colleagues were amazed by the behavior of Siddhartha Gautam. Thus they believed that Siddhartha to have become a glutton and moved away to Sarnath near Varanasi to continue their practices.

After the enlightenment, Siddhartha Gautam Buddha searched for his companions with the objective to share his teachings. At first, Kaundinya and his colleagues were skeptical about him but later sensed that he had changed since they left him. They finally believed that Siddhartha Gautam gained enlightenment and became the Buddha. The Buddha then preached the Dhammacakkappavattana Sutra which deals with the Four Noble Truths and the Noble Eightfold Path. These teaching are the core pillars of Buddhist teaching regarding the intrinsic suffering of existence and how to deal with it. Kaundinya reached the Sotapanna, a stage of arhathood upon hearing the teaching of Buddha.

As the teaching was spread, the followers gathered together to form the Sangha. Then the monks traveled with the Buddha by foot through the Gangetic plains area with the objective to spread the Dharma. Kaundinya first converted his nephew Punna to the Buddha's teaching. Later Punna attained arhantship and 500 of his clansmen also become the monk. Punna was acknowledged by the Buddha as the foremost of the disciples in preaching skills.

It is learned that after a brief period within the Sangha, Kaundinya retired to the Himalayas for the last twelve years of his life. The reason behind his behavior as mentioned in the Buddhist literature are:

First Kaundinya considered his presence to be a source of inconvenience for other Buddhist monks Sariputra and Moggallana. They were the chief disciple of the Buddha. As the seniormost member of the Sangha, he led the monks on the alms-round out but during the dharma talks, the two chief disciples sat on either side of the Buddha and Kaundinya behind them. They were uncomfortable to sit in front of the Kaundinya so he decided to solve the problem by absenting himself.

The second reason is the wish of Kaundinya to spend more quiet time in religious practice.

As mentioned in Samyutta Nikaya, Kaundinya demised at the banks of the Mandakini Lake in the Chaddanta forest. Kaundinya kissed the Buddha's feet and stroked them with his hands. He was cremated on a large sandalwood pyre. The ceremony was presided by Anuruddha and five hundred other monks. The remains were enshrined in the silver stupa at Veluvana.