Indian Buddhist Mahasiddha, Naropa was the disciple of Tilopa, and brother of Niguma. But some text confirms that Naropa was partner and pupil of Niguma. Regarding the name of Naropa, Scholar John Newman mentions, the Tibetans gave Naro's name as Naropa, Naropanchen, Narotapa, and so forth. As documented in the manuscript of the Paramarthasamgraha, he has been mentioned as Nadapa while a Sanskrit manuscript edited by Tucci mentions as Naropa as well as Naropada. 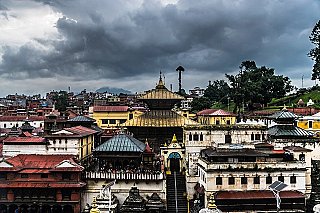 Naropa was born in the late 10th century in a high-status Brahmin family of Bengal. Naropa from an early age was inclined to meditation and spirituality. He was not prepared for marriage but with his parent's pressure, he agreed to marry a young Brahmin girl. But their marriage didn't well and after 8 years of their marriage, they both agreed to separate and become ordained.

At the age of 28, Naropa then enrolled in the famous Buddhist University at Nalanda. He there studied Sutra and Tantra. In the university, he achieves the reputation of a great scholar and faultless debater. The debate, at that time, had some rules and one of them was the loser had to be the pupil of the winner. Therefore, he won many students since he was the faultless debater. He eventually gained the title of Guardian of the Northern Gate.

As documented in his spiritual biography, he was once visited by Dakini while he was studying. During their meet, Dakini asked Naropa if he really understood the words of the Dharma, the teachings of Buddha. Without any hesitation, he replied that he did. Dakini seemed to be happy with his response so she again asked Naropa if he really understood the meanings. Naropa affirms the latter question as well. Dakini listening to the answers burst into tears stating that he was a great scholar and at the same time a liar as well. She further added the only one who understood the teachings of Buddha was her brother, Tilopa. Naropa, when heard the name, Tilopa, he experienced an intense feeling of devotion. He then realized that he needed to find the teacher to achieve full realization. Therefore, he abandoned his position at the Nalanda University and set off to find out the Tilopa. In his quest, Naropa underwent twelve minor hardship which was all hidden teachings on his path to enlightenment. Later he finally met Tilopa who further given the four complete transmission lineages. Naropa then began to practice this lineage. While studying and meditating with Tilopa, Naropa again had to undergo a further twelve major hardships and training to overcome all the obstacles on his path. He then culminates his full realization of Mahamudra.

Naropa spent a total of twelve years with Tilopa at the bank of river Bagmati, in the premises of Hindu Shrine Pashupatinath Temple in Kathmandu, Nepal. Near the bank of the river, they initiated their rituals and henceforth attained siddhi. Naropa, in his later life, stayed in Phullahari and demised at the age of 85.

Naropa is a lineage holder of the Kagyu school of Tibetan Buddhism and was an accomplished scholar. He was best known of having collated the Six Dharmas which is believed to help achieve Buddhahood more rapidly. In Vajrayana Buddhism, it is believed that these practices are held to have been given by the Buddha. The most important thing is these practices are passed on through an unbroken lineage till present day.