The city started to decline after Ayutthaya came into power and by 1438 CE it gave all the powers to Ayutthaya.

The Sukhothai Historical Park consists of ruins of the Sukhothai city, which is spread out 2 km in east-west and 1.6 km in north-south distance. In the park, there are around 193 ruins on 70 square km of land. There are around 26 temples inside the remains of the royal palace. The largest temple among them is Wat Mahathat. 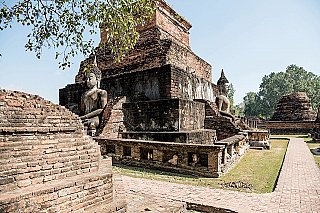 The main feature of this historical park is the beautifully carved Sukhothai Buddha statues, and temples and stupas made in different styles; Khemer, Lanka, sukhothai, etc. Most of these Thai Buddha statues are being placed in the Ramkhamhaeng National Museum with the motive to preserve the statues. Below are the information on some of the temples of Sukhothai Historical Park.

Wat Mahathat: It is the most important and impressive temple in Sukhothai Historical Park. The temple was established by Sri Indraditya in 13th- 14th century CE. The design of this temple is based on Mandala, representing the universe with the main principal stupa in the center which is surrounded by smaller stupas in eight directions. At the both sides of the main stupa have two 9 m tall standing Buddha statues named Phra Attharot. The temple also includes assembly hall and 200 subordinate stupas.

Noen Prasat: It is also called Palace Hill because it is the remains of the royal palace of the kingdom of Sukhothai. This place was discovered by Mongkut in 1833, who had made a pilgrimage to the north of Siam as a monk. Along with this palace, he also discovered Ramkhamhaeng stele and Manangasila throne.

Ramkhamhaeng National Museum: This museum was opened in 1964 by Thailand's King Bhumibol Adulyadej and Queen Sirikit. It is a branch of the National Museum of Thailand in the Sukhothai Historical Park. The artifacts included in this museum were donated by Phra Ratchaprasitthikhun, the abbot of Ratchathani Temple and locals. The artifacts include Buddhists arts, Sculptures of Hindu gods from pre-Sukhothai, Sukhothai, early Ayuthaya periods. It also contains porcelain from Yuan, Ming, Qing dynasties which were found during the excavations in Sukhothai and SiSatchanalai premises.

Wat Si Sawai: This temple was founded in the late 12th or early 13th century as Hindu Shrine for Vishnu and the place was used for Thiruppavai ceremony before the liberation from Lawo and foundation of Sukhothai Kingdom. We can see two different architectural style in this temple- Khmer and Lawo or Hindu style.

Wat Phra Phai Luang: This temple was built in the late 12th century during the reign of Jayavarman VII when the city was still under control of Khmer-Lavo. The purpose of this temple was to do rituals but it was lost with the rise of Buddhist temples nearby. Later, it was converted into Theravada Buddhist temple.

Wat Sa Si: It is a small temple situated in the middle of Traphang-Trakuan lake northwest of Wat Mahathat. The temple is constructed in Lanka styled stupa. On the east side of the stupa, there is a vihara and further to that lies the ordination hall on its own little island. On the surrounding of this stupa smaller stupa was built but due to decline, only foundations are found in the current situation.

Wat Asokaram: Another name for this temple is Wat Salat Dai since the original name of this temple was unknown. It was only in 1958, treasure hunters dug the stupa to find the information. They found stone inscription which mentions that the temple was built by the widow of Luethai, the queen mother, in 1399. The main attraction of this premises is large 5-stage step pyramid stupa, a vihara, a mandapa, and foundations of smaller pagodas.

Wat Tra Kuan: It is believed that this stupa was completed in the 15th century. About the surrounding of this temple; in the west direction of the site, there is a majestic stupa built in Lanka styled. In the east direction, there are the ruins of an ordination hall with a small terrace, six columns. Since there is a vihara in the eastern side of the stupa. It is believed that the layout of this temple differs from the standard Sukhothai temple. In 1960s archaeologists found a Buddha statue on the premises which is currently kept in the Ramkhamhaeng National Museum.

Wat Chang Lom: It is a temple built in Lanka Style. The stupa stands on a square brick base which also supports 32 elephant sculptures. In the present time, the premises has only remains of gallery, vihara and an ordination hall which is surrounded by a moat. The ruins of vihara consists of antique Buddha statue and round, square laterite pillars.

Wat Si Chum: This premises was built in the late 14th century by King Maha Thammaracha II. It contains mandapa in the middle of the complex and inside the mandapa, there lie a huge seated Buddha statues named Phra Achana. The Buddha statue measures 11 m wide and 15 m high. In the south of the mandapa, there is a narrow staircase passage which leads to the roof. The walls of this passages hold more than 50 slates which contain arts from the life of the Buddha. In the east, there are ruins of vihara which consists of three Buddha Statues. In the north side of the Mandapa, there are ruins of small vihara along with mandapa which also holds Buddha statues. The entire premises is surrounded by a moat.

Along with these important places in the Sukhothai Historical Park, there are other important places which has its own importance and history. Some of them are Wat Saphan Hin, Wat Aranyik, Wat Chedi Ngam, Wat Chedi Si Hong, etc. Currently, the park is maintained by the Fine Arts Department of Thailand with the help from UNESCO. The park has already been listed in the World Heritage Site. Each year, the park welcomes thousands of visitors who feel wonderful with the sights of antique Buddha statues, palace buildings, and ruined temples.