With the religion, Thai people have also carved their own lifestyle and customs which began to disappear with the influence of western countries in the 20th century. Therefore, with the objective to preserve Thai Buddhist culture and traditions, Phya Anuman Rajadhon, a remarkable scholar of Thailand began to collect and describe the Thai traditional customs and the folklore of Thai people.

Some of the Thai Buddhist Culture and Customs 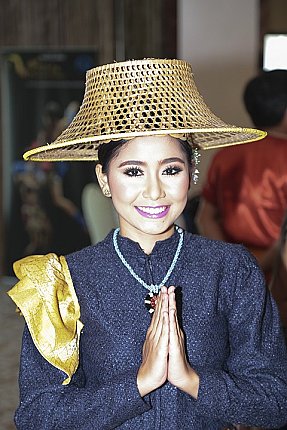 Wai is one of the most distinctive Thai customs. Wai is a lotus-bud hand gesture along with slight bow of the head and serene smile which is derived from the Anjali Mudra of the Indian subcontinent. This custom is usually used in greetings, leave-taking, and in many other situations.

This custom emphasizes respect and thankful to the seniors or other people for their guidance and help. It describes the feelings and practice that involves an account of an exchange of help and support in some or other ways. It is also believed that if the person is not able to help or support to other people who had helped in the past, then that person will have to repay in the next life.

The translation of the word Sanuk is “fun” in English but for the Thai people, Sanuk is more than just having fun in their life. It is about achieving satisfaction and pleasure from the works that the Thais do. Therefore, Thai people are generally seen being quite playful at work and during day-to-day activities.

Mai Pen Rai is the phrase which means "it doesn't matter" in English. This phrase along with serene smile is often used when the Thai people deal with disagreements, minor mistakes, or misfortunes in order to minimize the conflict, disagreements. The smile and the phrase indicate that the event is not important and the argument over the subject matter is worthless.

Believes regarding Head and the feet

It is believed that the foot is the dirtiest and lowliest part of the body and the head is the most respected and higher part of the body. With this belief, Thai people consider rude to place the feet at a level above to someone's head. This belief has also influence Thai people's sitting arrangements. When Thais sit on the ground, they always point their feet away from others. They usually put their feet towards the side or just behind them.

Thai customs relating to the monks

The Thai monk has very special recognition. They are well respected therefore laypersons are expected to sit or stand with their heads at a lower level than that of a monk.

In Thai Buddhist culture, women are forbidden to touch the Buddha statues, Pagodas, and Thai monks. It is easy for women to make sure they don't touch the Buddhas and Pagodas but the case with Thai monks are quite different. There has been a variety of methods which has been employed to ensure that women don't get an opportunity to touch the monks and vice versa. These customs are: