The Royal Ploughing Ceremony is also popularly known as the Ploughing festival. This festival is an ancient royal ritual which is held to mark the traditional beginning of the rice-growing season. In Thai, this festival is better known as Raek Na Khwan for Hindus and while Buddhist celebrates it as Phuetcha Mongkhon which literally means "prosperity for plantation". Since there were different rituals for Hindus and Buddhist of Thailand for the similar purpose, King Mongkut combined both the Buddhist and Hindu ceremonies into a single royal ceremony which is popularly known as Phra Ratcha Phiti phuetcha Mongkhon Charot Phra Nangkhan Raek Na Khwan. In this ceremony, first, the festival is celebrated with the Buddhist part in the temple of Emerald Buddha, Grand Palace complex and it is then followed by Hindu part which is held at Sanam Luang, Bangkok. In the present context, this festival is celebrated as Phuetcha Mongkhon Day. 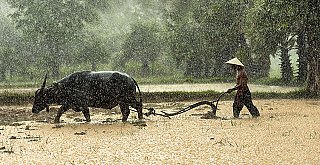 In this Royal ploughing ceremony, two sacred oxen are tightened to a wooden plough. As they plow the ceremonial ground, the court priests will spread rice seed in the ground. After the work is completed, the oxen are offered plates of rice, corn, green beans, sesame, fresh-cut grass, and water and rice whiskey. The offering to the oxen is not only to show appreciation to the oxen but it has a deep motive within. It is believed that the food, the oxen will consume, can help to make predictions regarding the coming growing season. It is the responsibility of court astrologers and priest to make the predictions.

It is recorded that this festival has its roots in the Sukhothai Kingdom. As John Crawford, a Scottish physician and diplomat, in early 19th century noted that even though the festival is popularly known as royal, the Siamese Kings didn't hold the plow. He further explains what he encounters that a person is chosen to represent the king. He stands in the middle of the field on one foot and the peasant then with the help of ox plow the field circulating the imitated king. It was considered a bad luck if the imitated king drops his second leg and is punished accordingly. When the peasant completes the plowing, the imitated king will drop down the leg. Varieties of food items are displayed in the field and the ox is allowed to choose from the given food to feed. The food that the ox choose will be the sacred food for the following year. By observing the ox collecting the food, the priest will make the future predictions.

Royal Ploughing ceremony in other countries

The royal ploughing ceremony is also celebrated in nearby countries like- Burma. In the case of Burmese royal plowing ceremony, the king plows the field outside the royal palace, ledawgyi, with the white oxen. The oxen usually were adorned with gold and silver. After the king plows the field, it is followed by the princes and ministers. While the representatives plow the field, the priest offers prayers and offerings to the Hindu deities, Nat votaries, and votaresses, statues of Buddhas. This festival is celebrated to request the rain god, Moe Khaung Kyawzwa to ensure a good harvest for the kingdom.

Burmese Buddhist also believed that the festival has sacred linked with the life of Buddha- Buddha as an infant performed his first ever miracle during a royal plowing ceremony. He meditated underneath a tree showing his gifted nature.