Songkran is the Thai New Year festival which lies in 13th of April every year. The word Songkran comes from the Sanskrit word samkranti which means transformation or change. 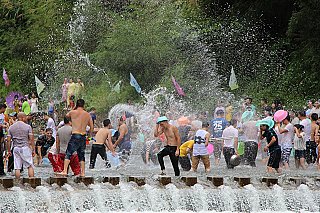 It is believed that the celebration of this festival has its roots in the Nang Songkran or the Seven Ladies of Songkran. Once Kabilla Phrom, Thai deity of good fortune and protection and similar to Bramha- deity in Hinduism, noticed a seven-year-old boy, Thammabal Kumara. Kabilla observed that he could recite the scriptures in public well. Therefore, Kabilla wished to test the child's knowledge and hence descended to the earth and asked three riddles. Kabilla also said that if the boy was able to give the answers then he would offer him his head to the boy. He also pointed out that if the boy was not able to give the answers then he would take the boys head. The riddles were "where did a person's aura exist in the morning? Where was it at noon? And where did it appear at night?

The boy couldn't get the appropriate answers for six days but when he was laying under palm trees, he heard a male and female eagle talking about the feast they would get. While the eagle was talking to each other, the eagle reveals the answer to the boy. He then without wasting the time, visits Kabilla and answers the questions. The boy replies the answers, in the morning, a person's aura appeared on his face. At noon, the position of the aura changes its position to his chest. At night, his aura changes its position to feet. With the correct answers, Kiballa lost and had to chop off his head. Since the head had several different powers, it could destroy the word completely if it's placed recklessly. It was an important issue about what to do with that head. Therefore Kabilla's seven daughters (Nang Songkran) placed their father's head on a phan (artistically decorated tray) and carried it around in the procession around Mt. Meru. It was then taken to Mt. Kailash with many offerings. Thus at the beginning of the year, Nang Songkran would bring out the Kabilla's head and then circles around the Mt. Meru and again places in the Mt. Kailash. 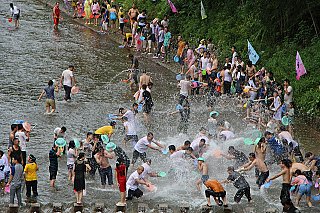 Thai people sincerely celebrate the Songkran, New Year festival. The people start their day with merit-making because the Thai people believe that it brings good results and also determines the quality of the next life. It also contributes the person's growth towards enlightenment. Apart from oneself, the merit is also shared with loved ones, either deceased or alive. If the loved ones are deceased, it helps to make a comfortable environment for their new existence.

This festival also symbolizes the festival of unity. Hence, the people, who migrated due to different reasons, return their home to the loved ones and elders to celebrate the festival.

Water festival is also observed on this day. This festival is mostly celebrated by the young people. Mainly major streets are closed down and are used for water fights. It is generally celebrated by splashing water on each other. During the recent period, with the influence of modernization, beauty pageants are also observed. In some areas, traditional parades are also held.

It has been recorded that some differences can be observed when Thai people from different region celebrates the New Year festival. People from the central region generally clean their house. They offer food to the monks, Buddha statues and also to their ancestors. The people make merit through different offerings. The people donate a sand to the temple for construction or renovation. They also release birds and fish to their natural environment.

The people from the south strictly focuses on the Songkran rule. The rules are work as little as possible and avoid spending money. The second one is not to hurt other people and animals. The third one is to speak the truth.

The people from north celebrates the festival with firecrackers. The symbolic representation of this act is to repel bad luck. On the next day, people offer self-made foods and useful things to the monks. The people bathe Buddha statues and then offer foods. They also observe water pouring rituals on Buddha statue and on the hands of elderly people.

The people of east observe this festival by creating sand pagoda. They visit the Buddhist temple throughout all the days of the Songkran festival. They also offer foods and necessary things to the monks. They also observe water pouring ritual on the Buddha statues and elderly people.