The Buddhist Temple of Thailand, Wat Arun's complete name is Wat Arun Ratchawararam Ratchawaramahawihan. This Buddhist temple is situated in Bangkok Yai district of Bangkok, Thailand, on the Thonburi west bank of the Chao Phraya River. It is believed that the name of this temple was influenced by the Hindu god Aruna. The premises of Buddhist Temple, Wat Arun is one of the best known Thailand's landmarks since the first light of the morning reflects off the surface of the temple with pearly iridescence. Therefore, the Buddhist temple Wat Arun is also popularly known as Temple of Dawn.

Historical background of the Wat Arun 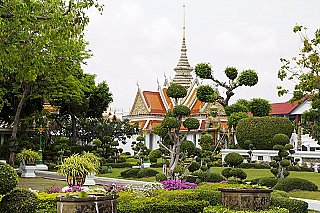 It was recorded that the temple was restored several times from the reign of King Chulalongkorn till the present times. The most extensive restoration work was conducted from 2013 to 2017. In this period, broken tiles were replaced and lime plaster was used on many surfaces. As the renovation was completed, there was some criticism of the temple's new appearance but it was defended that the work was done to reflect the temple's original appearance. 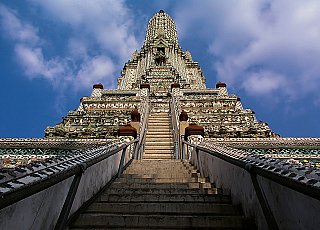 The main feature of Wat Arun is the central prang which is constructed in Khmer style of architecture and is encrusted with colorful porcelain. The height of this prang has been reported differently by different sources. The height is reported between 66.8 m and 86 m. The prang's corners are surrounded by four smaller satellite prang and are decorated with seashells. The prang is also decorated with bits of porcelain.

The central prang is topped with a seven-pronged trident. It is referred as Trident of Shiva by many sources. The base of the prang has various figures of ancient Chinese soldiers and animals. The second terrace houses four statues of the Hindu god Indra riding on Erawan.

The base is symbolically denoted to Traiphum indicating all realms of existence,

The middle is symbolically denoted to Tavatimsa where all desires are gratified, and

The top is symbolically denoted to Devaphum indicating six heavens within seven realms of happiness.

At the riverside, there are six pavilions constructed in the Chinese style. The pavilions are made of green granite and contain landing bridges.

Next, to the prang, there is the Ordination Hall which houses Buddha statue. It is believed that the statue is designed by King Rama II. The front entrance of the Ordination Hall has a roof with a central spire, decorated in colored ceramic and stuccowork. The gate of the ordination Hall is guarded by demons or temple guardian on either side of the gate. The Buddhist art, murals in the ordination hall were created during the reign of Rama V.