The temple is the earliest university in Thailand which provides the higher degree in religion, science, and literature. This point also adds the importance and value to the site. 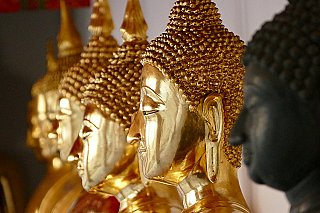 The information regarding the earlier older temple, Wat Phoram is still unknown but it is believed that the temple has been built after the reign of King Narai of Ayutthaya period. Regarding the temple, Wat Pho, It is recorded that the temple was built on the very site of the remains of the temple, Wat Phoram by King Rama I in 1788 CE. While the temple was being constructed, the King Rama I also instructed his men to collect the Antique Buddha Statues from abandoned temples in Ayutthaya, and Sukhothai, and as well as other sites. These collected Buddha statues were then placed in newly constructed Wat Pho Temple.

During the reign of the King Rama III, in 1832 CE the temple complex was renovated and expanded and it is recorded that the completion of this process took around 16 years and seven months. Some of the notable works were the area of the temple was expanded to 22 acres. Most of the structures were built or renovated. The temple complex was turned into the public education center. In order to foster the memory, the walls of the buildings were decorated with diagrams and inscriptions on various subjects. Therefore, the Wat Pho Temple complex is regarded as Thailand's first university. Later on, the temple complex also became the center for traditional Thai massage. The center for traditional Thai massage is still operative in the present context. 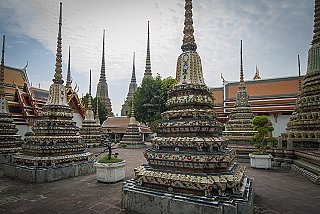 Some of the structures or temples in the Wat Pho Temple complex are mentioned below.

Phra Ubosot is the ordination hall which is used to perform Buddhist rituals. It is regarded as the most sacred building of the complex. Earlier it was constructed in the Ayutthaya style by King Rama I but later it was renovated in the Rattanakosin style by King Rama III. This hall houses Buddha statue gilded with gold leaf. It is believed that Rama IV later placed some ashes of Rama I under the pedestal of the statue of the Buddha with the intention to provide homage to both King and Buddha by the general public at the same time.

Phra Maha Chedi Si Rajakarn is a group of four Chedis or stupa which measures a height of 42 meters. These stupas are dedicated to the first four Chakri kings. The first one in a green mosaic tile was constructed by Rama I while another two stupas, in yellow and white, were constructed by King Rama III for himself and his father King Rama II. The last one, in blue, was built by King Rama IV.

This Viharn Phranorn is the chapel which contains the reclining Buddha statue. This chapel was constructed in Ayutthaya style during the reign of King Rama III in 1832 CE. The statue is 15 m high and 46 m long and is considered one of the largest Buddha statues in Thailand. The sole of the feet of the Buddha is 3 m high and 4.5 m long. At the corridors, there are 108 antique singing bowls which are placed near the walls. These singing bowls represent the 108 auspicious characters of Buddha. It is believed that the devotee who drops coins in these singing bowls will have good fortune and on the other hand, it helps to maintain the Wat.

Phr Mondop is the Scripture Hall which contains Buddhist scriptures. In other words, this can also be taken as the small library dedicated to teachings of Buddha which is not open to the general public with the intention to preserve the scriptures.

As a part of the public university, the temple complex also has a school for traditional medicine and massage which was established in 1955 CE. This school was the first school of Thai medicine which was approved by the Thai Ministry of Education. This school now offers four different courses in the Thai medical sector. These are Thai pharmacy, Thai medical practice, Thai midwifery, and Thai massage. As a part of the guidance, the temple complex has many medical inscriptions and illustrations placed in various buildings.