Wat Phra Mahathat Woramahawihan is the main Buddhist pilgrimage site in Southern Thailand. The assigned name is derived from Pali Language. The translation in Pali Language is Vara Maha Dhatu Bara Maha Vihara, which literally means "Great Noble Temple of the Great Noble Relics Stupa". The other name for this Buddhist temple is Phra Borommathat Chedi.

The temple was built by King Dhammasokaraja in the early 13th century CE. The main purpose of its construction was to establish a symbol for the Theravada Buddhism sect. in the province. It is believed that the temple house a tooth relic of the Gautama Buddha. 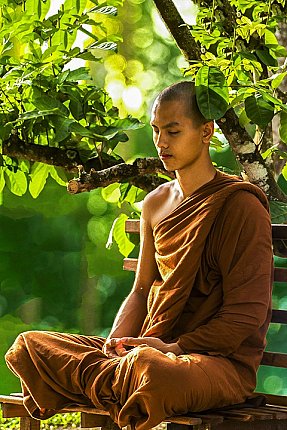 It is believed that Prince Thanakuman and Queen Hem Chala got the relic of Buddha. They placed the relic in the small pagoda which they had built in Hat Sai Kaew in 291 CE. Later when king Si-Thamma Sokarat established the city, he built a new temple on the very site. The temple was constructed in the Mahayana Style. He called the temple Wat Phra Borom That.

Later in the history, it has been agreed that the city was almost deserted by epidemics and war. The king Dhammasokaraja was motivated to rebuild the city. Therefore with the help of public participation, he not only build the city but also constructed a larger stupa in Sri Lankan style. The stupa was built on the very site of the temple Wat Phra Borom That. This stupa also helped to establish Theravada Buddhism. Along with the stupa, other religious buildings were also constructed like for example, Wihan-Bodhi Lanka, a roofed cloister around the Bodhi tree.

Features of the temple

The complex is built in a rectangular space which spreads around 5.14 hectares. The temple complex as in other temple is divided into two parts. One is for Buddha-avasa, area for religious activities and the second one is for Sangha-avasa, residential area for monks.

The outer appearance of the main stupa is a bell-shaped added with an umbrella-like spire. In between bell-shaped dome and the spire, there is a row of walking Buddha statues in relief. The spire is around 10.89 m high and is covered with gold leaf which weights around 600 kg. The stupa stands above a low brick wall, which provides a space for the devotees to ambulate in a clockwise direction around the stupa.

The main stupa is surrounded by numerous stupas or chedis and then the gallery which houses Buddha statues. The ancient Buddha statue is of Sukhothai Buddha statue dating from 13th-14th century CE. There is altogether 158 small stupa that surrounds the main stupa. These small stupas are built by the devotee dedicated to their deceased earlier generations. Therefore these stupa houses ashes and bones of the deceased ones.

The main assembly hall and the chapel

The museum is also maintained in the temple complex. The museum is often called as Wihan Kien and it displays historical objects, auspicious objects, and offerings. The museum also houses numerous antique Buddha statues.

Mondop lies in the north of the main assembly hall. It houses Buddha's footprint. The temple complex also houses a bronze statue of Tambralingan princes Jatukham and Ramanthep. It is also regarded as Hindu gods Kartikeya and Vishnu.