The Dvaravati style is basically derived from Indian archetypes of both Amaravati and Gupta styles, which were later, integrated the styles of locally available art. There are three distinct categories of Dvaravati Buddha statues which is based on the standard of craftsmanship of the art. 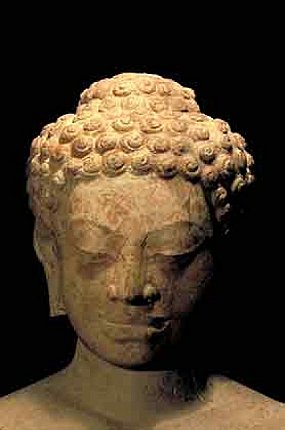 Type 1: The first type of statues in Dvaravati Buddha statues were heavily influenced by Indian styles of Buddhist art. The Buddha images have no aureole and the faces of Buddha in the images resemble to that of Indian Buddha statues. The positions of the statues of this category had either seated legs loosely folded or standing in the Tribhanga (leaning) pose. The hand gestures mostly involved the right hand while the left hand would be shown holding the end of the robe.

Type 2: The second type of statues were more or less influenced by the styles of local arts. The aureole in the images appears in a lotus bud shape or an orb over the cranial protuberance with large hair curls. The eyebrows of the Buddha statues form a continuous 'crows wings' curve awhile the eyes protrude and the nose looks flat with thick lips.

The seated posture of the images in this type are similar to that of Amaravati style with loosely folded legs. Diagonally draped robe with a short mantle placed over the left shoulder were features of the scultpure. The standing Buddha statues were usually positioned in the straight standing pose while performing the Vitarka mudra. Similarly, the robes of the statues hung to mid shin level with a symmetrical trimming.

Type 3: The final period of Dvaravati Buddha statues were visibly influenced by Khmer. The Thai Buddha statues had square face and cleft chin. The straight edged mantle were normally extended to the navel. The images would normally be carved with fully folded seated legs and resting on a roughly carved lotus base.